I wanted to visit Mantanani for THE LONGEST TIME, but couldn’t get around doing so all these while, either I haven’t saved up enough or basically, just haven’t got the weekends to spare it with.  Some folks call it the mermaid island because of the dugong sightings underwater – which is seriously magical. Some folks even say you could catch a glimpse of dolphins. They’ve had photos with it, but I personally have never seen them before. 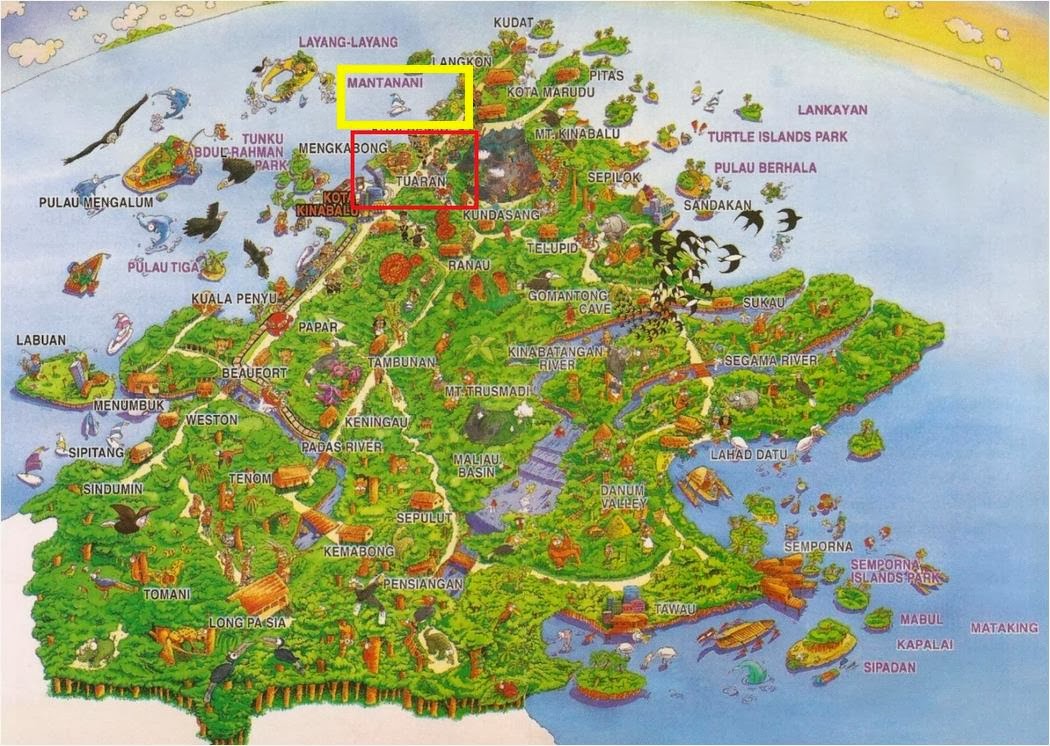 If you see the map above, I’ve yellow squared Mantanani Island in comparison to the journey from Kota Kinabalu. If you’re not a map kind of person, that is --- quite far. Not Sipadan (Tawau, Sandakan, Lahad Datu kind of far) but far enough to be a put off to some locals at times. Previously, you’d have to drive up north for approximately 1.5 hours, or take a bus to Kota Belud, to reach a small jetty that will then lead you to Mantanani Island via speed boats. Now if you’ve got ample of time, and all the energy in the world to do a road trip – by all means. This saves you so much more too and highly recommended if you’re traveling on a shoestring. But if you don’t, and if you’ve got only little time to spare, this is your option;  a ferry ride to Mantanani Island directly from Kota Kinabalu itself! 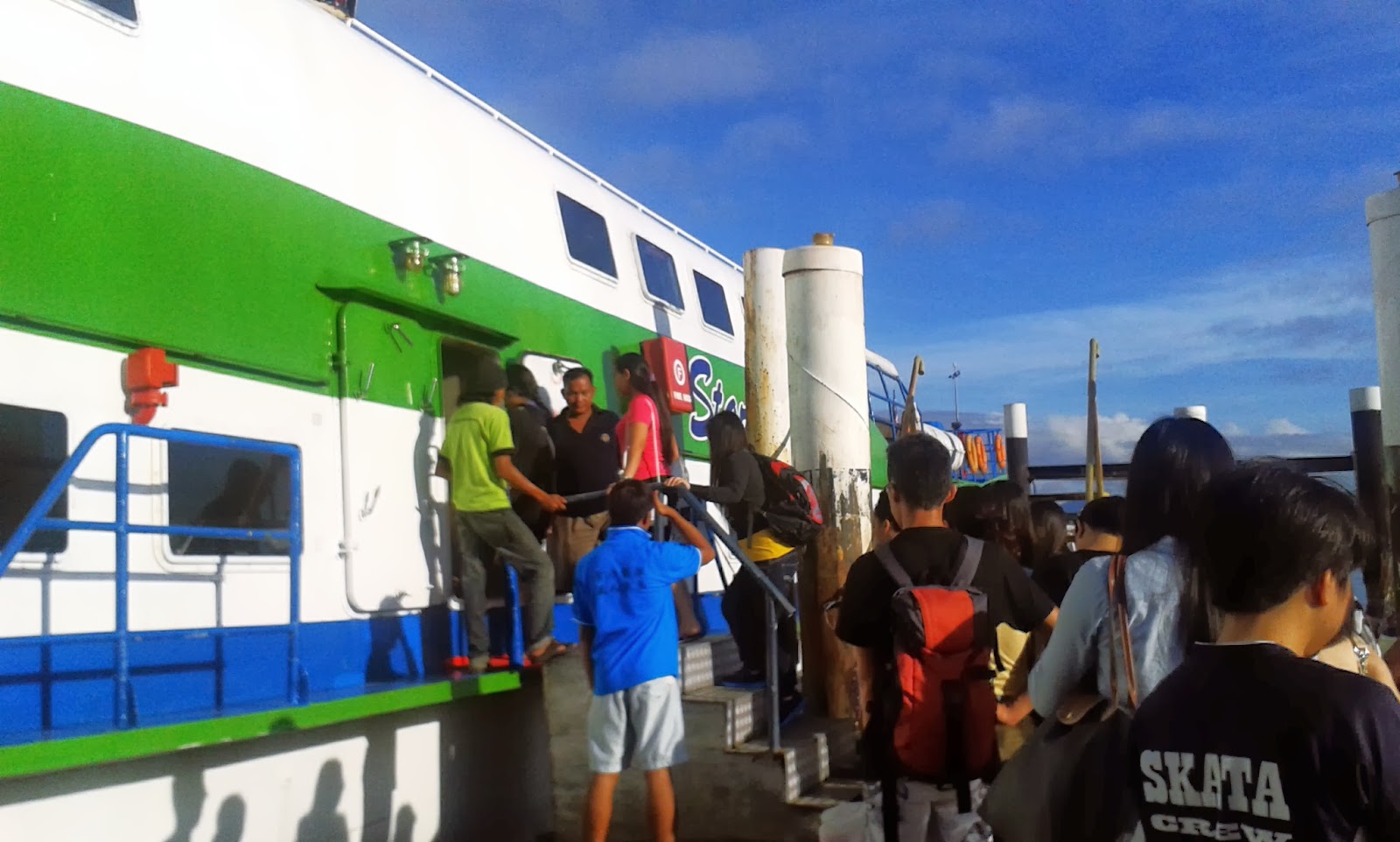 There are a few things to bear in mind while considering this option.  It takes approximately up to 2 hours ferry ride from the famous Jesselton Port to Mantanani Island. If you’re not a fan of choppy rides especially choppy SEA RIDE, then …. you’re in for a treat or, or rather will barf your treats. I was heroic for the journey to the island, but wasn't when coming back. I wanted to barf everything out then and there *_* 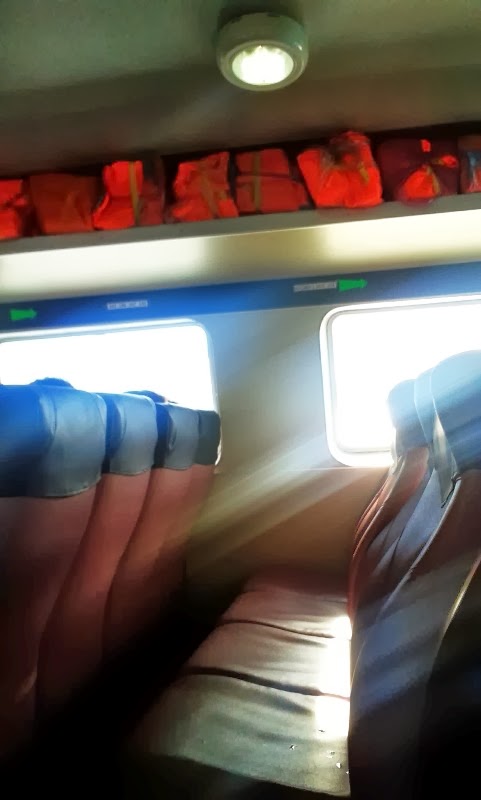 I had no idea how Mantanani looked like because all I’ve ever known about Mantanani was hearsay.  No one had ever properly took good photos of it and make their post viral enough that it reached more people or even tell people what are the things that are or aren’t there.

So when I reached Mantanani about hundreds of metres away from the island via speedboat (the ferry dropped us off nearer to the island because there are corals) I was stunned.

It was SO BLUE. 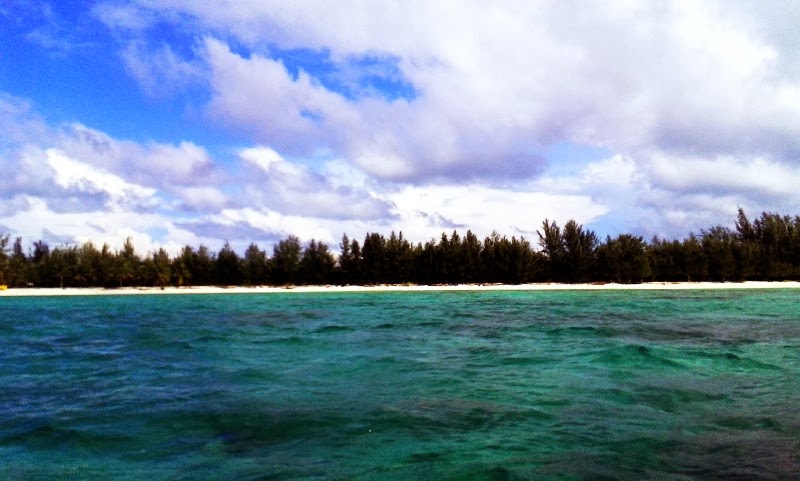 That blue reminded me of Boracay’s blue, but we all know how filled Boracay is. Tourists and people at every inch, you can even spot them from the ferry. But Mantanani was spotless (of people!). Mantanani is a white sands and blue waters kind of beach, few of its kind that are blessed in this world. 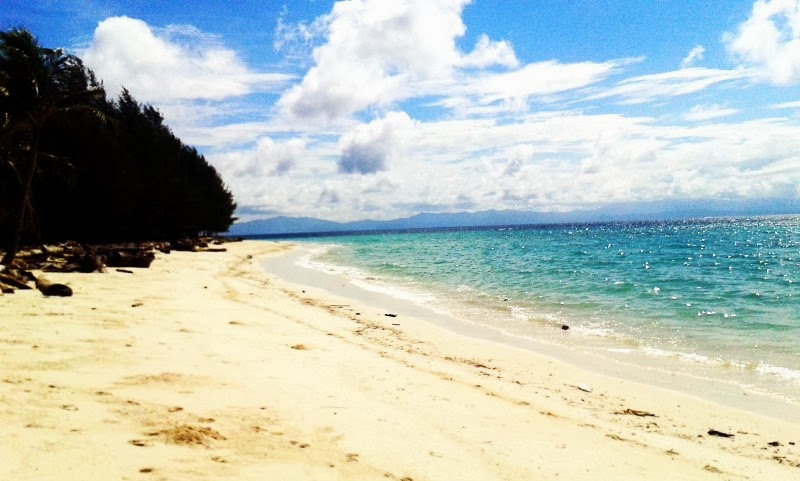 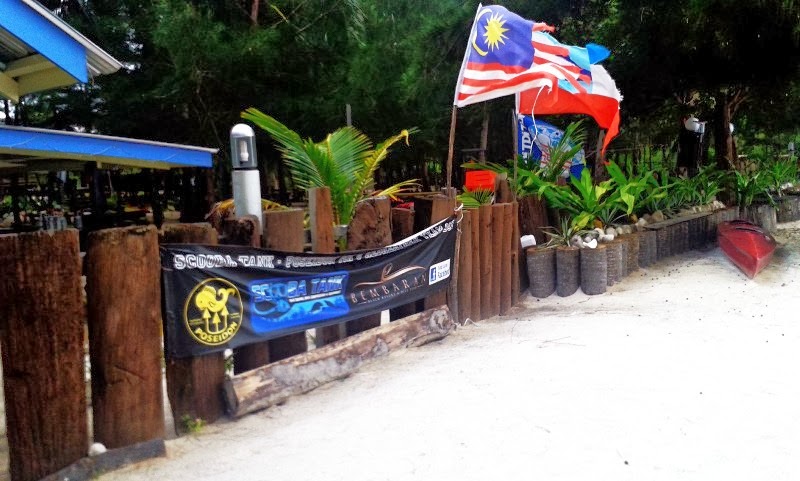 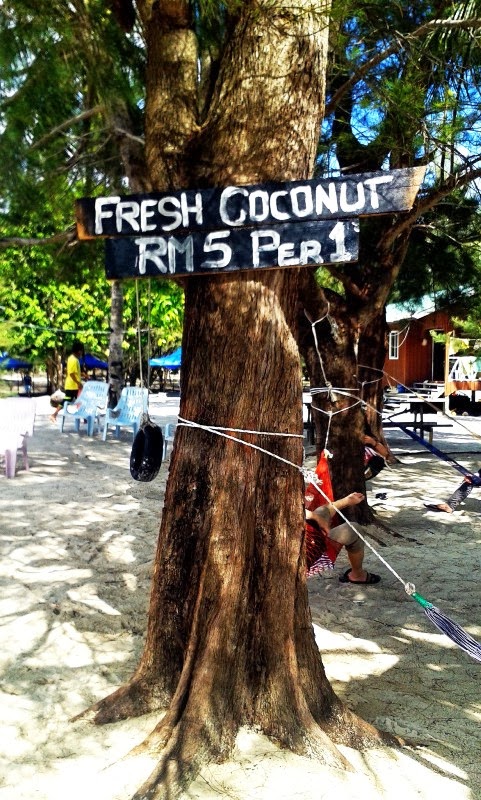 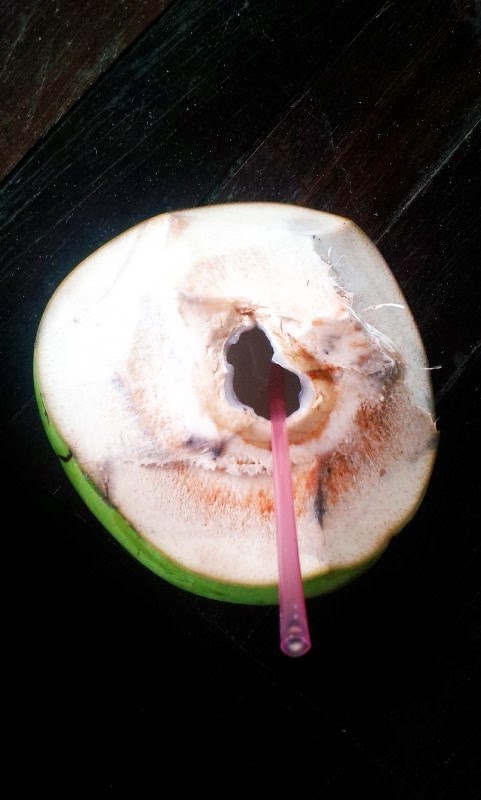 So after FINALLY landing on them white sand, I spotted all the activities and even checked with them what are the things that one can do in Mantanani ; volleyball, frisbee, kayak, discover diving, snorkeling and banana boats are generally the favourites. Or… a good ol’ rest. Most of us are connected to Mantanani via packages, so chances are your activities are already predetermined. But if by any chance you’re coming for a complete leisure trip of nothingness, then I’d recommend you to take your time. It’s pitch silent and peaceful there. 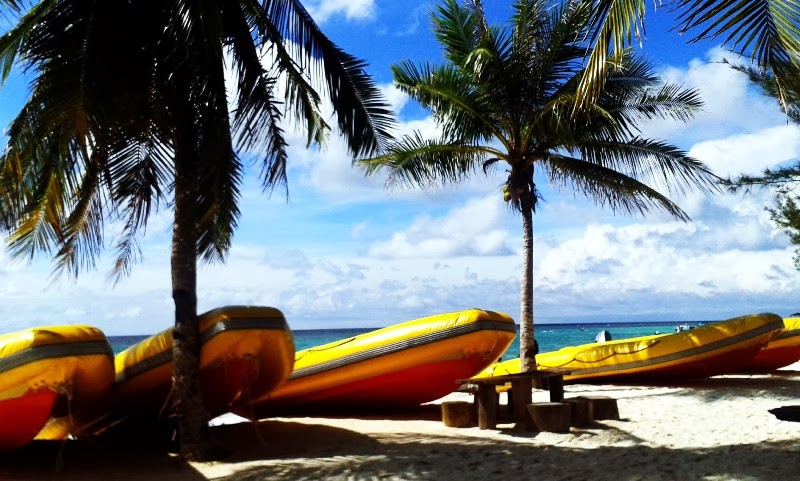 There are areas for lunch, most of which I think were for team building lunch packages unfortunately, there are no independent restaurants at the moment. They’re attached with the resorts, but can still be accessible by the publics. We had our lunch provided by the package, so this I must stress -- please bring your own munchies or your own food if you'd like to save some money. Some crackers would cost as much as RM 9. 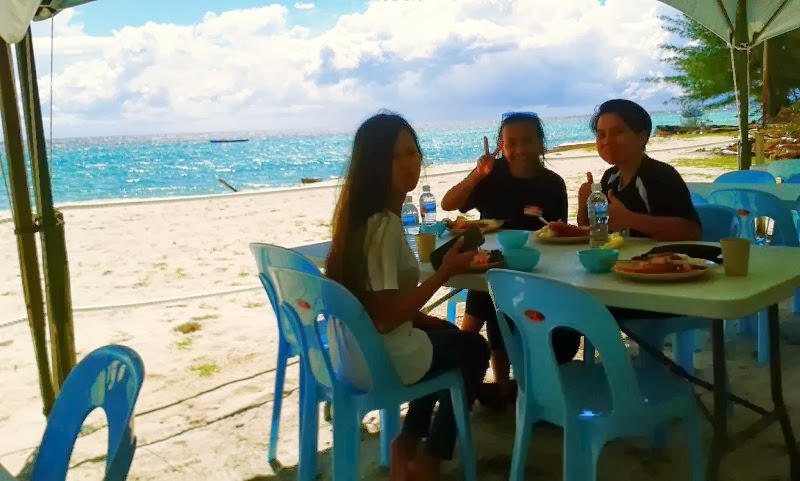 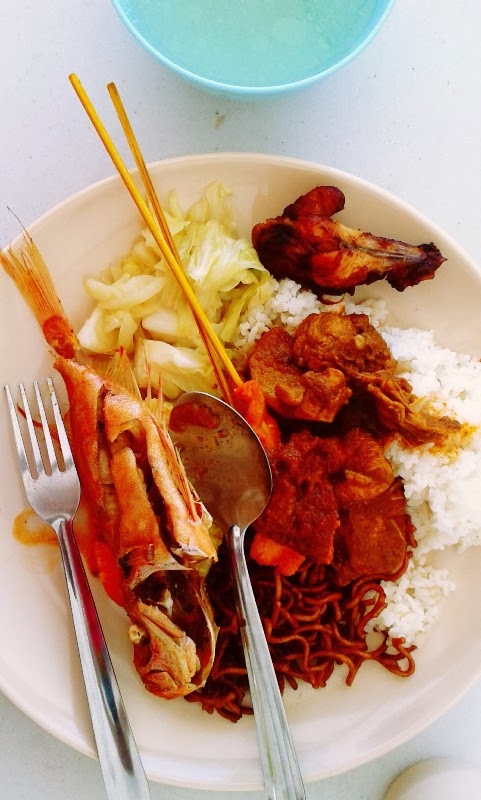 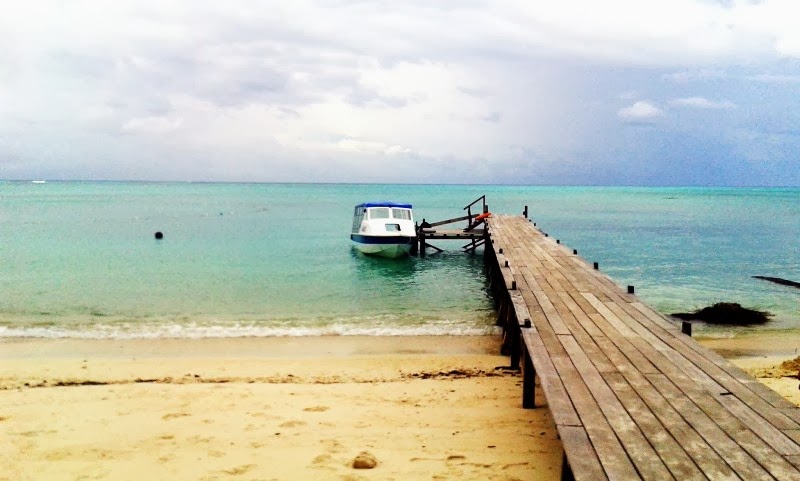 If there is one thing that you must know about the island is that…. It’s actually also a local village! They’re water villages with residences surrounding the area and most of the staff there are from the village itself! The nearest land town to Mantanani is Kota Belud, which is about 45 minutes away via speedboat. I even saw these sea men transporting boats of logs – and all I had in my head was -- I wonder whether the boat ride was even choppier with the logs inside. 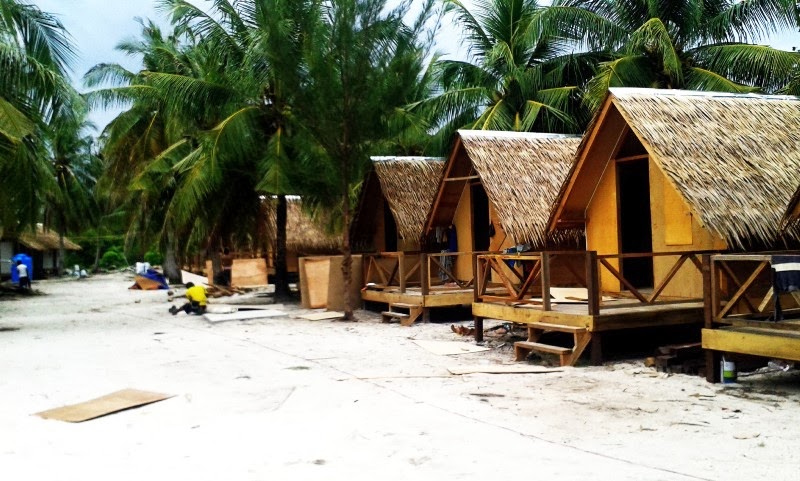 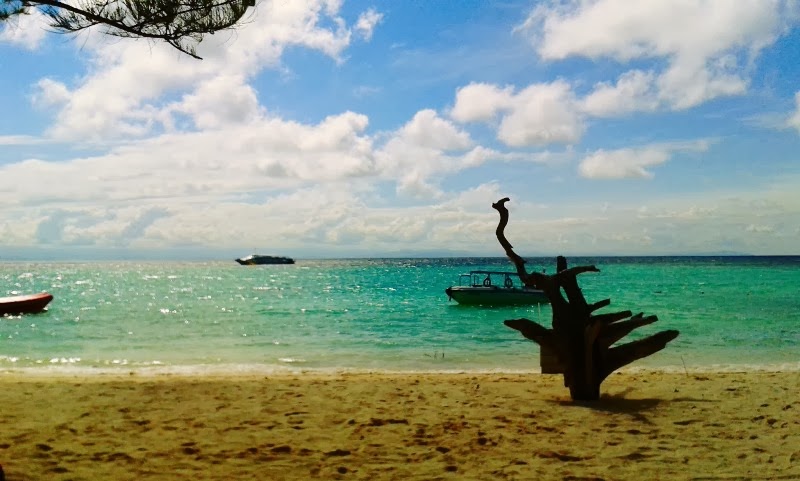 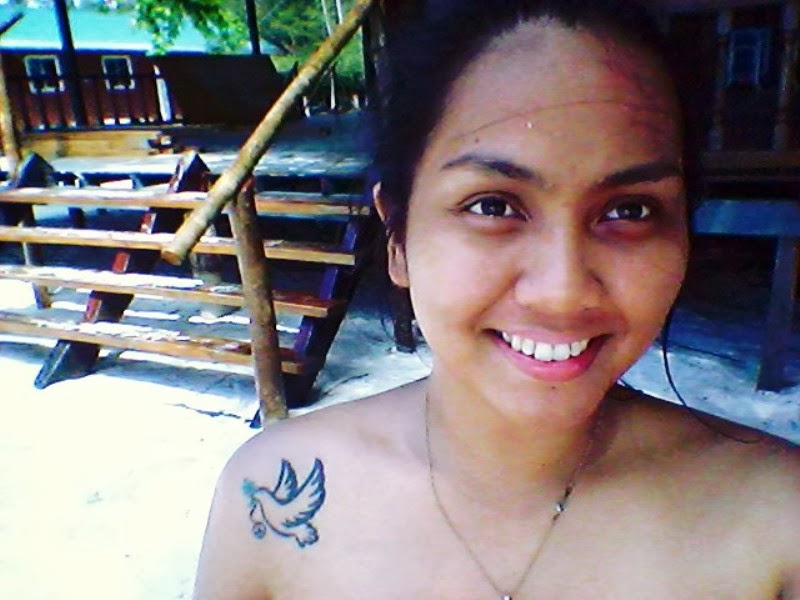 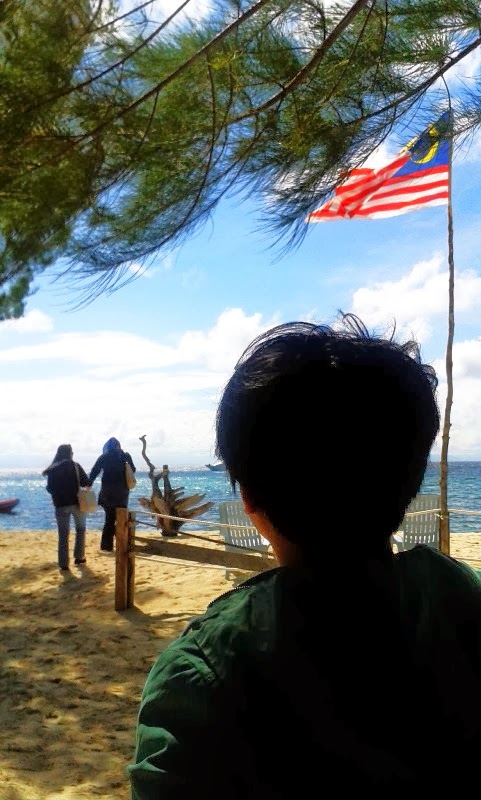 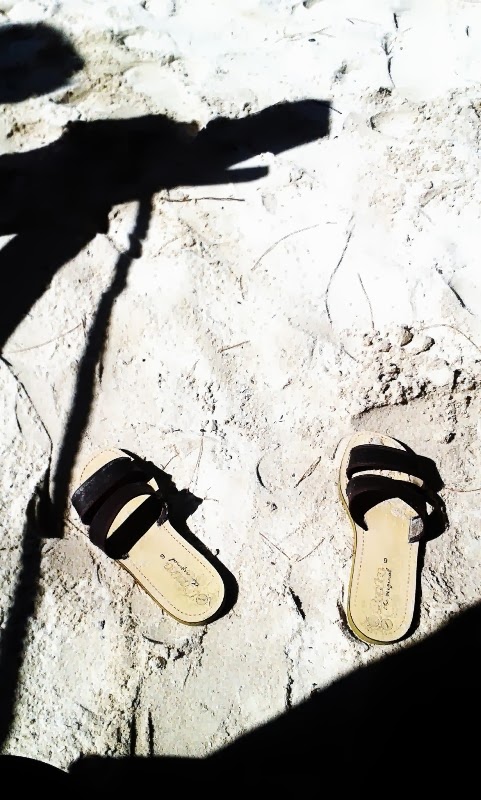 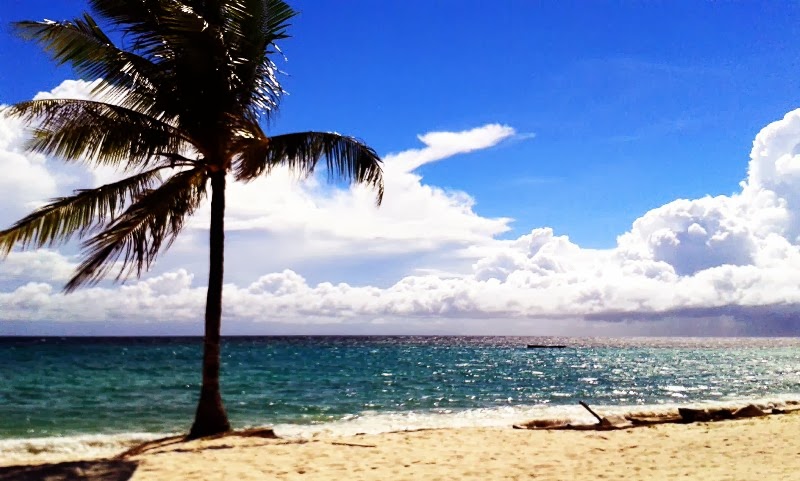 As for the costing, I've just got hold of the Jesselton Port's office and had a chat with some of my friends who knew how to get around, they told me at the moment, the ferries are only operating alongside with a complete day trip package which cost up to MYR 280/ pax inclusive of ferry & land return transfer, snorkeling, barbeque lunch, snorkeling set and entrance fee. Reason why this is the published rate at the moment which is also the agent's rate, is because getting into the islands an even using the boats as transportation are only available for those who have the license to do so.

So if you drive yourself to the Kuala Abai Jetty (of Kota Belud) as well, you have to go through an agent to transport you and your day trip for it as well. The latter might be of another choice if you're interested in exploring the Kota Belud town as well.

Hope this helps, AND please let me know if you have figured out other alternative ways to get into the island and if you're willing to share it with our other virtual friends here :)

oozzeee said…
Hi. I have stumbled upon your blog while planning our trip to KK. Can I just clarify about the rate you mentioned? So the only choice if we want to go is to take the day tour package of 280? We can't just go there by ferry on a DIY trip? Thanks. Looking forward to your response.
7:08 PM

If you're coming directly from KK, that is the only way to do so. You have to go to the Jesselton Port and (yes) liaise directly with the particular agent to go to Mantanani, that means yes only that rate.

I have heard a few people doing it personally by traveling to Kota Belud, travel to Kuala Abai Jetty which have smaller boats. BUT, I was told that upon reaching the jetty, it is managed by an agent too, that makes it chargeable of a certain fee which I've yet to find out.

I am not sure whether you can use "other" boats to travel to Mantanani... but something tells me you can. I have yet to figure that one out.

Jacqkie Rowena said…
If you're really keen on saving (and quite adventurous while you're at it).. try taking the bus to Kuala Belud, head to Kuala Abai jetty, and ask about other boats available to go to Mantanani..
9:36 AM

Anonymous said…
The ferry from Jesselton point is not longer operating.
There is no public ferry service and it is not recommended to travel to Kuala Abai or Rampayan Laut ( where most of the tour operators are starting now) without an earlier boat reservation.
7:43 PM

Jacqkie Rowena said…
Thank you for your update!
8:20 PM

Popular posts from this blog

June 09, 2019
Sabah is really on the world's map these days. You can't walk a mile without seeing a tourist frolicking through their phones getting their bearings these days. Which is actually alright, I just hope we are aware of the sustainability of things. Which also makes something about a road trip, so refreshingly untempered.

Something about going away to somewhere (even though it is still towards a touristy area) feels incredible. Maybe it's the scenic drive. The more engagement with your surroundings, and the chatter you enjoy with your family and friends in the car. The independence in exploring a new place, instead of going in and out to a place you see so much in pictures.

The four of us decided to travel to Kota Belud and stay overnight at Cabana Retreat because one of us is heading to the big city Singapore to work. Kind of like a farewell, and that I almost forgot it was the Ramadan month, so Fat can't eat during the day. I was also still very sick, coughing my lungs …
Post a Comment
Read more

March 13, 2012
Before I proceed to my write up on Pulau Sapi, let me do the duty to carefully explain to you why there are so many people talking about so many islands at the mention of the word, Sabah. Reason why I'm doing so is because whenever people visit KK City, they have very limited time in exploring most of the natural gorgeous attractions, and sometimes ended up just moving around KK City. And when one does that, people would usually end up asking, why are there so many mentions of islands when we get to experience none?
As you can see from the previous Matthew Paul map below; Sabah is situated close to top north of the Borneo Island. That said, it's a privilege to say that tons of islands are under the local towns and cities surrounding the shores of this particular part of Borneo island. From Sipitang (look out from South left), imagine yourself  "walking" from the Sipitang's shore / beach walk up slowly to Menumbuk, Kuala Penyu, Pulau Tiga, Kota Kinabalu, Tunku A…
14 comments
Read more

March 22, 2020
I've been missing Adelaide many times. Sometimes, unjustifiable. Because I can't remember what I'm actually missing. Is it the quiet suburbs, the empty church, the shops that close early.

I can't tell. Probably the suburbs and the fact that my public bus stops right where I live. Or the small gatherings my Malaysian friends and I would always have.

This time, I came back to Adelaide as a working young adult, not without its complications in hindsight (the beginning of Coronavirus) with just a little bit more money to spend on and possibly a better perspective in life. Lol, maybe.

I came a few hours earlier, YY came later from Melbourne. We stayed at the Mercure Grosvenor, great location and overlooked a courtyard with very friendly staffs. I had plans to meet Beth whom I haven't met and caught up in at least 13 years and Carmen about 11 years too.


Carmen stayed back in Australia after university, visited Melbourne for a while until she came back again to Adelaide …
1 comment
Read more